After a confrontational meeting at the end of last month, neighbors attended a public hearing Monday to tell Village of Lansing Trustees what they think about a proposed zoning change to a lot on Bomax Road.  The Trustees will decide whether or not to change the zoning from 'Business and Technology' use to 'High Density Residential'.  If approved the zoning change will pave the way for an upscale 140 unit rental complex.  But developers and residents of a nearby development filled the Village of Lansing Hall to oppose the change, charging that it will negatively impact their property values, increase traffic, and slow the completion of their own project.

"If you put in this apartment complex you’re going to make what we’re doing slow down," Lisa Bonniwell told the Trustees, representing IJ Construction of Ithaca with her mother Janet Jonson.  "The value we all have in our homes is probably going to go down.  People often say ‘let’s not make this personal’.  It is personal.  We’ve invested in this community.  We voted you all in.  now listen to us.  We’re not happy.  That’s why we’re here."

The Village of Lansing Trustees listened to arguments, for and against, Monday on whether to change the zoning on a 20 acre parcel of land on Bomax Road

The zoning change was prompted by a proposed 140-apartment project by Park Grove Realty, LLC .  If enacted, it would allow high density residential construction on a 19.46 acre parcel on Bomax Road that includes 1,200 feet of road frontage, near the Business and technology Park off of Warren Road near the Ithaca-Tompkins Regional Airport.  The project would include 16 buildings and 210 parking spaces.

Currently owned by Cornell University, the property is located between residential neighborhoods developed by the late Ivar Jonson and his wife Janet and the business/technology zone.  While Mayor Donald Hartill pointed out that the matter being considered is only the zoning change, and not any particular project, people speaking for and against the proposal clearly were not separating the zoning issue from the proposed development.  Hartill noted that if Cornell doesn't sell the parcel to Park Grove Realty, they will sell it to someone.

"It will be developed at some point," Hartill said.  "The idea that it’s going to remain in its current state is just not real."

After a September 19th meeting at which speakers in favor of the change were interrupted and those opposing it applauded, Hartill demanded that Monday's public hearing would be more civil.  A three-minute timer was displayed on large screens in the Village Hall, and speakers were kept to the time limit, although they were allowed to sign up to speak again.  Applause was forbidden.  Hartill said that the Village is still accepting comments in written form, as well, and it would be accepted at least until the zoning change is either changed or denied.

"This is information gathering," Hartill said.  "It is not a debate.  Some of the documentation we have received -- one, in particular -- is rather threatening.  I would really like to get this back to a conversation between neighbors, and not ‘them or us’."

Proponents of the project said the 'down-zoning' would actually benefit the neighboring development because it would be a high-end complex that would act as a buffer between their homes and the business/technology district.  The developers submitted a traffic study (posted on the Village Web site) that shows an the existing traffic infrastructure is adequate to handle new traffic generated by the proposed project.  But residents weren't buying it, citing concerns about increased traffic and safety issues.

While advocates of the project referred to studies showing urgent housing needs in Tompkins County, one resident questioned why the Village should be made to shoulder new housing for the entire county.  Planning Board member Deborah Dawson pointed out that projects like the one proposed are desirable in today's market, because fewer that 20% of home buyers can afford homes costing over $150,000. 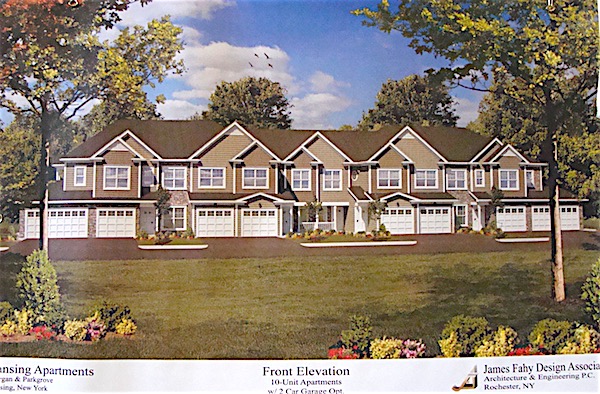 If the zoning change is approved it will pave the way for a proposed upscale apartment project that will include 14 Buildings, each with ten apartments, four on the ground level and six upstairs, each with its own entrance and garage.

The engineer's report and all input provided by the public was also posted on the Web site.  Hartill said that all new comments will be added so that everyone can see what the Trustees are seeing as they consider the zoning change.  He encouraged everyone to review the materials so that future comments could be based on facts.  But he noted that the future impacts of the change are not 100% clear.

"I know a lot of you own property there and are concerned about traffic and changes in your property value," he said.  "If you look on the Village Web site you will find three documents with respect to property values.  One says they will decrease by between 5% and 15%.  One from the County Assessor, says they will not change.  And there’s a national study involving many other similar kinds of projects that says it won’t change or it might increase your property values by 5%."

Attorney Khandikile Sokonie, representing the Jonsons, charged that the zoning change would be a case of impermissible spot zoning, coming on the heels of a new update to the Village Comprehensive Plan.  She questioned the criteria used by Planning Board members in recommending the change to the Trustees, and admonished the Trustees to listen to existing residents.

Village Attorney David Dubow advised the Trustees that an exception to the public meetings law is the Board's right to consult with him privately under 'client/attorney privilege', to ascertain their legal standing and liability as the decision is being made, especially in light of Sokonie appearing to raise issues.

Hartill said that the earliest the Board may vote on the change would be the November 7th meeting, but didn't rule out postponing that date.

Understanding that however the vote goes someone will be unhappy with it, Hartill said he wants to talk individually with each trustee to get a sense of how the Board might vote at this point.  Despite accusations by some neighbors that the rezoning is already decided upon, the opposite appeared to be true in the 'Mayor's Comments' portion of the meeting after most of the speakers had already left.

"I find it a very difficult decision," Hartill said.  "It’s not absolutely straightforward.  I can argue both ways.  It’s not easy for me."