Cayuga Operating company announced today that they have submitted applications to allow them to close a 155 megawatt coal-fired burner in order to repower it with natural, and that plans are still in motion to construct an 18 megawatt, 75 acre solar farm on it's 434-acre site in northwest Lansing, making it one of the largest solar farms in upstate New York.  Company officials say Compressed Natural Gas (CNG) will be conveyed to the plant by truck, eliminating the need for a gas pipeline  If approved, the conversion will not be paid for at ratepayers' expense.

"We think this is a reasonable and forward looking transition for Cayuga," says Beowulf Energy/Heorot Power Managing Director Michael Enright.  "We're hopeful that in the months ahead we can pursue this with public and political support.  We think transitioning to natural gas and renewables saves local jobs, helps the local tax base, and creates more potential for future economic growth in Tompkins County and the Lansing area."

The company submitted an air permit modification application to the New York State Department of Environmental Conservation (DEC) May 1st that will, if granted allow the conversion of one of the plant's two burners to natural gas.  Traffic statistics from a 2017 report by the Tompkins County Transportation Council shows that the 25 to 60 trucks per day used to bring CNG to the plant would only add 2% more traffic at most.  The trucks are also fueled by CNG, which is cleaner than gasoline and diesel trucks, and will reduce the transport of coal by train.

"Electrical power is a product, just like anything else that's produced, and I want that produced here, in Lansing, by my neighbors, friends, constituents," said Tompkins County Legislator Mike Sigler.  "I've advocated for years to keep this power plant open.  Would I prefer a pipeline, sure;  that's more property tax money for the county.  But, if trucking gas in will save the plant, then I support that as well.  It's highly regulated by the federal and state governments and is safe.  Not just safer than gasoline or propane, it is safe.  Propane gas tanks dot this county with little concern.  These trucks will be passing by my home, just as other tractor trailers do, and the risk is the same as any other truck."

The DEC will conduct a public comment period as part of the process of evaluating the application.  Cayuga Operating Company Vice President of Development Jerry Goodenough says the conversion itself is a simple process that will entail replacing coal nozzles with gas nozzles on the burner.  CNG trucks will hook up directly to the facility, eliminating the need for large tanks.  The second burner will remain coal-powered, to be used when there is demand.

Cayuga Solar has applied for over 1.5 million NYSERDA Renewable Energy Credits (REC) to help pay for construction of the solar farm.  This is the company's second try to obtain the credits, and company officials are optimistic they will qualify in this summer's round.  Applications are due by August 15th, and awards are scheduled to be announced in October of 2018. 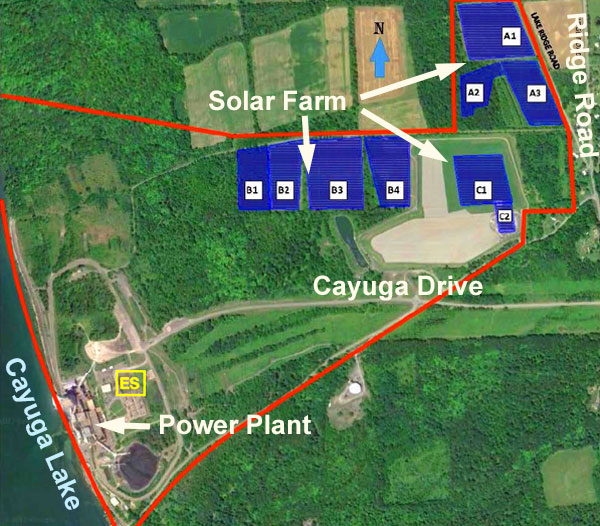 Cayuga Solar plans to build one of the largest solar farms in New York State at an estimated cost of $25 million. It will produce 18 megawatts of energy, powering the equivalent of 3,100 homes with no emmisions.

A major advantage Cayuga Solar has over other solar projects is the existing infrastructure that connects the facility to the power grid.  While many solar farm projects stumble on just finding a location that makes sense for connecting, as did a proposed solar farm that would have powered the Lansing schools (that was one of the obstacles), the existing power plant connection can also be used for the proposed solar installation and future renewable projects on the site.

The company is partnering with TC3 and the Lansing Central School District to make the construction and operation of the solar farm part of their curricula.  Talks are also underway with potential customers, notably the Ithaca-Tompkins International Airport, which will convert almost all of its power needs to renewable energy.  Airport Manager Mike Hall says that if an agreement can be reached airport heat pumps and other electrical needs will be powered by Cayuga Solar plus a smaller solar installation that will be erected above the airport parking lots.

Cayuga operating company officials say they view repowering the coal fueled unit with natural gas and the 18 megawatt solar farm as the beginning of a multi-phased plan that will create an energy park on the property, as well as addressing school revenue distress stemming from the devaluing of the power plant over the past eight years.  They point to a US Energy Information Administration report that shows natural gas produces the least amount of carbon dioxide into the air of any of the fossil fuels.

"The Cayuga Operating Company's announcement that it plans to pursue developing a large-scale solar farm while converting one of its coal-fired boiler units to natural gas is exciting news for Lansing and the entire Finger Lakes region, "said New York State Senator Pam Helming, who represents District 54, which includes Lansing. "This is a significant step forward not only for our environment – reducing air emissions and preserving our lakes – but also for our economy by employing local people to complete this project. I applaud Cayuga Operating Company for working toward a better energy future for our environment and our economy, and I look forward to seeing the final result of this project."

In addition to the power plant's dramatic loss of property value of  $140 million by the year 2020, closing the power plant entirely would have resulted in the loss of jobs and the attendant loss of other tax revenues for the community.  Losing jobs was a major concern of local supporters of a more ambitious repowering plan that the DEC denied in 2016.  If successful, the new repowering plan will preserve local jobs.

"New York's energy mix is in transition, and Cayuga is moving in the right direction," said New York State Building and Construction Trades President James Cahill.  "These steps will preserve good-paying union jobs at the plant, and will also benefit local residents and the surrounding communities."

Company officials point to a poll they say demonstrates 'broad and firm support across all demographic groups' for repowering the plant with natural gas and renewable energy technology.  The survey was conducted in May of 2017, polling a representative sample of 300 respondents by telephone that the research company reported was fully representative of the county's demographics, and had plus or minus 5.7% margin of error.  Those interviewed were asked to respond to the sentence, "The Cayuga Operating Company is considering a plan to convert its power plant in Lansing from coal to natural gas without a public subsidy and also build a large solar farm on the property."

"The results are impressive: 64% of voters are favorable, 21% are neutral, and just 11% have unfavorable attitudes," wrote pollster Hart Research partner Frederick Yang. "While Tompkins County voters are broadly favorable to the Cayuga plant, there is also intensity in their attitudes--32% very favorable and 32% just somewhat favorable--which suggests an electorate that is firm in its support,  I stress again that NO other information was provided prior to this question, which makes the nearly two-thirds 'favorable' result very encouraging.  In addition, the positive reaction is bipartisan, with 62% of Democrats, 65% of Republicans, and 68% of non-partisan having a favorable response."

While opponents anticipated the announcement Tuesday, urging the Tompkins County Legislature to oppose the repowering plan, it has also garnered local support.

"Tompkins County Area Development looks forward to continuing to work with the Cayuga Operating Company on strategies that will ensure the continued or increased generation of property taxes as well as employment opportunities at their site in the Town of Lansing," said executive director Michael Stamm.  "We are especially interested in the concept of an energy park where the existing infrastructure would be utilized as leverage to stimulate private sector investment and job creation."

If Cayuga Solar is able to obtain the credits company officials estimate the solar farm could begin operating by July 2020.  Company officials anticipate it may take up to a year for the DEC to make a determination on its air permit modification application.  Once approved, Goodenough estimates that the conversion, paid for by the company, will take four to five months to complete.

"We recognize and embrace the role renewable energy and natural gas will play in the better energy future we all want for New York," said Cayuga Operating Company Vice President of Development Jerry Goodenough.  "We believe these projects will help New York achieve its energy goal while also establishing Cayuga's future commercial viability."