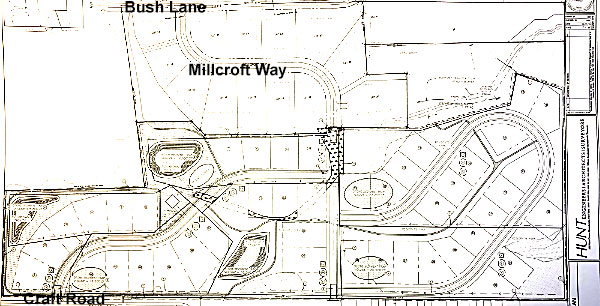 The Village of Lansing Planning board Monday approved a preliminary plat proposed by Beer properties, LLC for a project they are calling Lansing Village Cottages.  The proposed cluster development would be comprised of 38 rental duplex cottages on 41.19 of land between Craft Road and Bush Lane.  The project includes park lands, walking paths, and 4.56 acres of 'forever wild' land with paths that tenants can walk along.

Two weeks ago a number of neighbors from Millcroft Road attended a public hearing to oppose the project, largely on the grounds of traffic, connecting their road to a new road in the Beers' development, and saying that they were restricted to conditions of the 'Millcroft Covenant' when they bought their homes, and now feel "betrayed" because the Covenant was removed from the Beer property that was originally to be future phases of the Millcroft development.  But Village Attorney William Troy advised that the covenant was a private agreement between the former developer and the homeowners, thus not under the jurisdiction of the Planning board.

While the public hearing was held open from the previous meeting so residents could make further comments Monday, none of the neighbors came back. The Planning Board closed the public hearing and began discussing the proposal, as well as the neighbors' concerns.  Planning Board Chair Lisa Schleelein noted that nothing in the current proposal is in conflict with Village zoning for Medium Density Residential (MDR) zoning.

"At the last meeting we had quite a number of people here voicing concerns about various things," said Schleelein. "Most notably, I think the traffic and the road, were of concern.   The road was always on the plan and was approved a number of years ago when the whole subdivision first came to light. The covenants set some expectations for the whole situation. It's a little more problematic for some people. The covenant has nothing to do with the Village, so that is not something that we have to get involved with."

The approval came about a year and a half after Beer properties, LLC approached the Planning Board with a more ambitious cottage project that would have required approval of a Planned Development Area (PDA) to accommodate 107 small cottages grouped around nine pocket parks.  The new plan proposes 42 lots, the number allowed by regular MDR zoning, which would have larger lots spread throughout the entire property.  In a cluster subdivision the number of allowed lots remains the same as it would be in a regular subdivision, but the buildings are allowed to be built on smaller lots, closer together.  Lot size ranges from smaller 14,040 square foot lots to 24,100 square feet.

The trade-off is that 20% of the property (4.56 acres for this development, in the northeast portion of the property) is dedicated to open space, or 'forever wild' land.  The Beers plan to build walking paths through this space, which will be for the use of tenants. In the western portion of the development the Beers plan to connect to existing Village Greenway trails, for use by the general public.

Planning Board member Mike Baker said that while only residents who oppose connecting Millcroft Road to the new road spoke two weeks ago, that some of the neighbors there are actually looking forward to it.

"I talked to some folks there that weren't at the meeting," said Planning Board member Mike Baker. "They had mentioned closing off the road and I don't think that that's really in the spirit of making the village a village anywhere. So I don't support closing it off.  I just don't think it promotes a village. We have friends there and we talked to them, some of are the spouses of people who were here, not in favor of the road going through. They take their kid some bike rides. They're actually looking forward to that walk-through so that they can actually walk through there with their family, and go for walks and go for bike rides. So I know there were a lot of people in Millcroft that are supportive, but there are some people there that aren't supportive of that."

After brief discussion with the developers about allowed wetlands disturbance, and clarification of which pathways will be part of the public Village Greenway and which would be for tenants' use only, the board voted unanimously to approve the preliminary plat.  The next step is the development of more specific plans for the project that will be presented when the Beers request approval of a final plat.