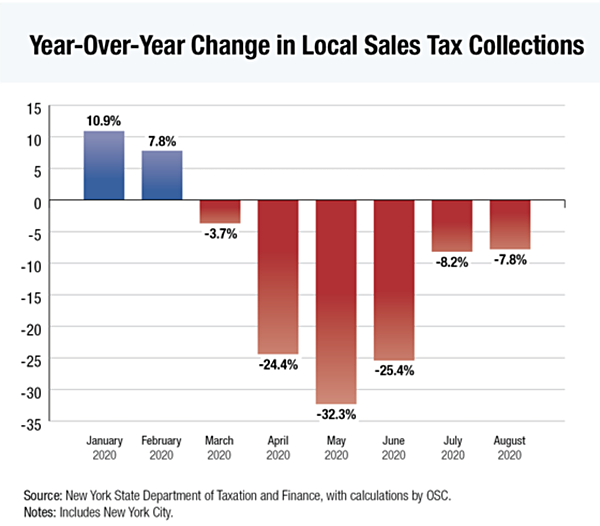 This drop in revenue is similar to the decline in July of 8.2 percent, though much less extreme than the early months of the pandemic when sales tax collections plummeted by double digits.

"Since the pandemic hit, local governments have seen a massive drop in sales tax collections. This is hurting their bottom lines and many have few options to plug the hole," DiNapoli said. "Washington needs to stop playing political games and provide financial help to local governments to weather this storm."

Almost every county in the state saw drops in overall collections for August, ranging from 1.3 percent in Tioga to 35.5 percent in Delaware. New York City had a 7.1 percent decline, a $43.9 million reduction in revenues, which was comparable to the 7.3 percent ($44.6 million) decrease seen in July.

The two counties with collection increases were Hamilton (1.1 percent) and Westchester (18.6 percent). Westchester’s tax rate increase in 2019 may account for some of its year-over-year growth in August.

Year-Over-Year Change in Local Sales Tax Collections
DiNapoli reported last month that local sales tax collections dropped 8.2 percent in July (or $116 million), and 27.1 percent in the April-June quarter, down $1.2 billion from collections in the same quarter of 2019. Over the six-month period of the pandemic’s effects (starting in March, when only New York City was showing losses, and continuing through August), local governments have received $1.5 billion (16.9 percent) less than they did during that same period in 2019.