Dr. DigitDr. Digit 'Splains It All
My desk has a compartment in it for the computer. I keep my computer tower in it to reduce noise. The cabinet has a four by six inch hole in the bottom for air circulation, plus another hole on top for cables to get in.
The problem is that it gets too hot in there, so it needs a fan to blow the hot air out of the 4 x 6 inch hole. My sister had given me a "personal" variable speed fan. By adjusting the speed I could make it cool sufficiently while keeping the noise level way down. But not being meant for 24/7 operation, it died.
So I went to Radio Shack. The guy was very nice but had no idea about fans, so he sent me to the local super-geek electronics store. The guy there was much nicer than usual (sometimes they are scornful that you don't know an ohm from a megahertz), but all he had was computer fans, so he suggested Home Depot or Lowe's. So I went to Lowe's.
The guy there was very nice -- he even plugged in the small reciprocating "two speed, whisper quiet" fan for me and in that big cavernous store it sounded "whisper quiet." But when I got it into my desk it sounded like the wind in that movie "Twister."
So I went on the web and performed a Google search on "quiet fan." I got 197,000 hits on computer fans, plus one hit on a message board post by a woman who had found a quiet fan at Target for her aquarium. So I thought, "Aha! Aquarium Fans!!!"
But at the pet store the guy thought I was crazy, and, indeed, all his fans were meant to work under water. So I went to Target. They were out of the ones the woman had recommended.
So I went to Walmart.  Walmart is the size of Rhode Island! After getting more exercise in one morning than I had gotten in 2003 through 2005, I finally found a shelf of fans at the far end of the store. And as I turned the corner to the next aisle, they had even more fans, including the one recommended on the web! So I bought it.
But it was pretty noisy, even when I sat it on a sheet of foam rubber, plus it didn't cool the cabinet enough. The secondary fan (a REALLY LOUD one) in the computer kept kicking in. Terrific! (not)
My friend Mike and I occasionally go on "Boy's Night Outs" (BNOs) where we go for dinner and then walk around the mall or Barnes and Noble or someplace so our wives won't tease us too mercilessly for coming home from our wild night out before 8 pm. Mike is a ham radio enthusiast, so he knows a lot about electronics. We were in Radio Shack.  So I told Mike about my fan problem and recommended a simple household dimmer. They didn't have anything that could handle the wattage in Radio Shack, but we were in the mall, so I told him, "We're going to Target!"
To make a long story obnoxious, the next day I took my Lowe's fan and carefully slit between the double lamp wire, then clipped one of the single wires. I stripped the ends, soldered a dimmer wire to each one, and used heat shrink insulation to cover up the bare wire (yeah, I could have used tape, but it dries out over time). Then I turned on the fan motor, plugged it in and turned the dimmer. Presto! I have a quiet variable speed fan! 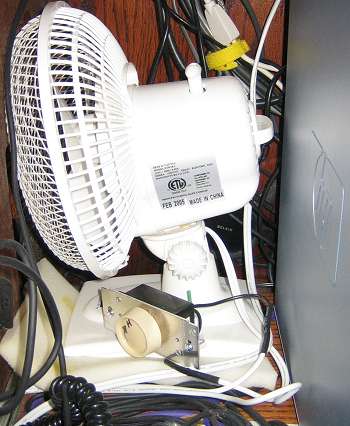 My quiet, variable speed fan
I put it in the cabinet, adjusted the dimmer, and it works perfectly. I get pretty excited over geeky gadgets, but none other has produced this level of euphoria in a long time!  With all the computer desks that have compartments for the computer, surely I am not the only one with this problem.  It's a niche market that is completely unmined.
See how great it can be when you take the time to go out for dimmer and a trip to the mall? :-)
----
v1i5
Tweet