Myers Park is not just a beautiful spot on Cayuga Lake.  It is used for countless activities including concerts, festivals, weddings, religious services, parties, barbecues, hiking and running, the annual fireworks, swimming, camping, boating... and that only begins to describe the popularity of the park that includes two playgrounds, a half dozen pavilions, a beach, a marina, a band stand and a historical log cabin, among other features.  Park Superintendent Steve Colt warned the Lansing Town Board Wednesday that the level of activity that grosses around mixed with weather and normal wear and tear has damaged park roads to the point where they need major repair.

"The park is going to be awesome this Spring," Colt told the Town Board.  "But I do want to say that the infrastructure of the park, the roads, themselves, are really getting rough.  That part of the infrastructure is the last big thing.  It's more than just looks.  It's functional.  We can either deal with it when it needs to be done, or face a bigger problem as it disintegrates farther."

Nobody argues that the work needs to be done.  The issue is paying for it.  Highway Superintendent Jack French says his crew can save the Town a lot of money by paving the roads in-house, but estimates it will still cost the Town over $100,000 just for the blacktop to repave the main loop road plus smaller roads off to the sides and leading to the Town marina.

"We're in a great spot because we've got some of the best pavers around," said Highway Superintendent Jack French.  "They know what they're doing.  We've got it all figured out.  We've just got to come up with the money." 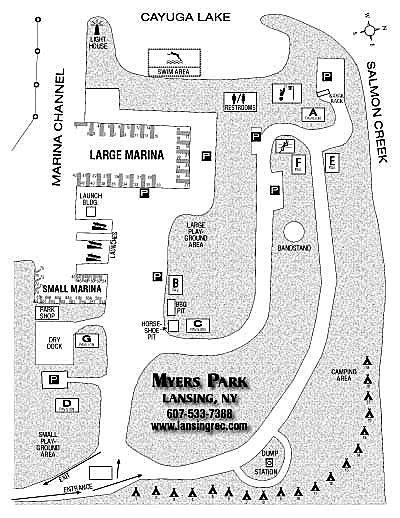 The Myers Park loop road alone accounts for a half mile of roadway.

French said that the $100,000 would just be for repaving existing roads and would not cover new roads or widening.  Colt added that he doesn't want wider roads in the park because narrow roads encourage slower driving.

Councilman Ed LaVigne noted that there have been preliminary discussions about repairing the park roads, and said Colt and French have great ideas for the project.  He asked them for suggestions on how to pay for it, and said it will take some time before the Town can move forward with substantial repairs.

"It's just about being creative," Colt said.  "I know where that stands on the priority list.  Everything else is more important than that and it should be.  But if we get a shot, that will increase the value of the park a lot." 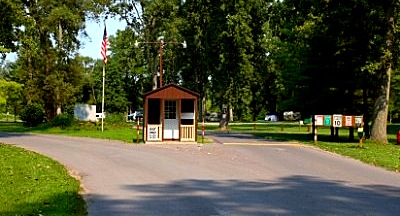 Aside from the beauty of the park, its maintenance is important because the park grosses around $133,000.00 per season for items including campsite, cayak storage, pavilion and marina slip rentals.  Not included in that figure are donations for the concert series in Myers and Ludlowville parks, which pay for themselves.  That money goes to funding the Parks and Recreation department and would not cover the cost of road repairs.  Most of the money is generated during the summer months.

"June through the end of August is prime time," Colt says.  "However, traffic and people walking, driving or using the park is year 'round."

Supervisor Kathy Miller suggested that Colt apply for a grant to get the paving done.

"There's another round of grant money coming out," Miller said.  Some of it is for waterfront projects.  This would be considered waterfront, I would think.  So it's worth a try.  If you don't apply you're not going to get it."

Colt said he would pursue the grant, adding that if any other opportunities arise the Board should keep the project in mind for funding.  He said that a phased approach could spread out the cost, taking care of the worst spots, with the rest coming later.