Cargill Facility Manager Shawn Wilcznski presented a sketch plan Monday to the Town of Lansing Planning Board for a 600' z 200' salt shed structure he said will reduce the impact on the environment,including Cayuga Lake.  The proposed pre-fabricated steel frame salt shed is proposed for the existing salt storage pad closest to the lake.

"The primary reason for this is to effectively reduce our environmental impact or the potential environmental impacts associated with us handling and storing of salts at the facility. So the discharge of the salts from the conveyor belt would be encompassed within the building structures," Wilcznski said. "Very seldom do we get to a point where we actually have an opportunity to tarp and cover that salt, that's on those pads in order to reduce the amount of storm water generation that's associated with us storing salt and handling salt at that facility. So primarily the reasons would be to reduce any impacts from, from dust emissions from the discharge of the conveyor belt, and then also to reduce any stormwater brine generation associated with the storage of the salt that's on the pad." 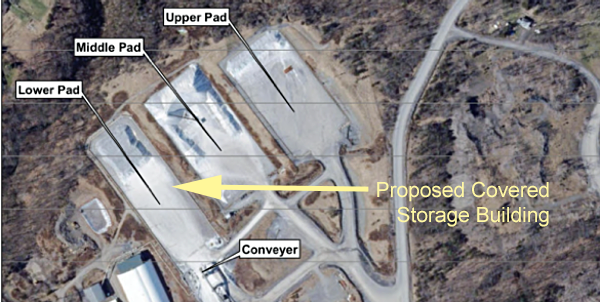 Wilcznski explained the company is able to stack and cover the other two pads, and said they are only exposed for about a month each year while 'sacking' the salt.  He said the lower pad is exposed for considerably more time, which is what prompted the proposal.  The shed would be enclosed on all sides, except the south side which would allow for trucks to come in and out of the building.

The lower pad currently has a catch-basin, which is part of a brine monitoring system.  It will be enclosed within the storage shed.  When asked whether there are plans to cover the other two pads, Wilcznski said that it would cost $5 million per pad, but didn't rule out doing it if economic conditions allow.

"That's why we're starting with, uh, what the lower pad first, because it has the highest potential for influence due to its inherent nature.  This is a significant investment, obviously," Wilcznski said.

A few Planning Board members said they are pleased that Cargill is proposing the project.  Planning Board Chairman Gerry Caward said the company will need to get a variance from the Zoning Board of Appeals (ZBA) because the building hight exceeds that normally allowed.  Town Director of Planning C.J. Randall said Cargill can apply for the area variance and for site plan approval simultaneously.

"We are certainly are hoping to do this so we can so we can minimize our environmental impacts on Cayuga Lake," Wilcznski said.