Many in Lansing and Tompkins County have embraced the dream of transforming the now-closed coal powered power station into a data center that uses clean, renewable energy.  Part of Cayuga Operating Company's plan has been to transform its acreage around the plant into a solar farm that could potentially provide some of the power needed for the data center. Cayuga Operating Company's Jerry Goodenough and Douglas Roll brought sPower Senior Manager for Solar Development Michael Farrell to meet the Lansing community Wednesday at a 'getting to know you presentation' at the Lansing Town Hall to talk about the solar portion of the plan.  What Farrell presented exceeds the original plan for Cayuga Solar.  He outlined a 30-year solar project that is expected to produce between 100MW to 200MW that could potentially span up to 1,400 acres at and near the power plant property.  Additionally, a 20MW electricity storage facility is being considered.

"A general rule of thumb is about about five to seven acres per megawatt for a project," Farrell explained. "So the order of magnitude for a 200 megawatt project, you're looking at a thousand or fourteen hundred acres. There are a lot of different factors that have to go into that. Obviously you have setbacks for your wetlands, if there are any species concerns, if there's any other areas that you need to avoid, that can increase the amount of acreage you need."

sPower is a Salt Lake City-based independent power producer that builds and operates more than 150 mainly solar projects in 12 states, with projects totaling 15GW.  The company also has some wind and storage battery projects. The company is owned by AES Corporation (which at one time operated the Cayuga Power Plant) and the Alberta Investment Management Corporation.  The company recently opened a New York office.

Farrell said sPower would operate the solar project for the 30 year lifetime of the project.  He estimated that if the project gets as high as 200MW it will generate up to 250 to 300 temporary construction jobs and two to five ongoing jobs.  He said the project is in the very early planning stages, and that his company wants to engage the community to facility community concerns.  He said sPower is excited about the Cayuga Solar opportunity, shared his contact information, and said he would be back to talk about the project as more details are developed.

"One of the main reasons we chose sPower is that when we talked to them about ownership of these projects they said they want to be part of the community.  They want to meet with community members.  They want to own the project -- they don't want to flip them," Goodenough said.

That the project is slated for the old power plant site makes Lansing particularly attractive to sPower, because it will be able to reuse existing equipment existing interconnection equipment that provides electricity to the NYSEG grid.

"That's one of the strengths of this project that makes unique compared to many other solar projects that  people might be looking at," Farrell said. "We're going to try to use as much of that as we can. It's already located there -- it was used for the plant itself. We will have to build some additional electrical infrastructure, but it will located within the plant footprint. And it will be located near to the existing electrical and interconnection substation equipment." 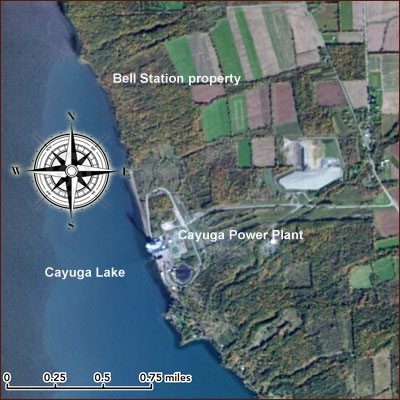 The power plant property is 400 acres, and while negotiations have not begun sPower is eying the Bell Station property immediately to the north (owned by NYSEG, and named for a 1969 nuclear power plant project that was never realized) and privately owned land to the east that sPower could lease or purchase.  Contiguous land is required to best take advantage of existing interconnection equipment.

The wooded portion of the nearly 500 acre Bell Station land is being considered by Finger Lakes Land Trust and other local interests for a state forest.  A large portion of the land that borders Cayuga Lake is forested, while the eastern portion is currently leased for farming.  Farrell said the solar project would most likely not use the forested portion.  At this phase any use of the land is theoretical because NYSEG owns it and would ultimately decide whether to sell it or who to sell it to, if they do anything with it at all. Farrell said that any land beyond the usable portion of the power plant parcel is speculative because sPower has not begun negotiating with NYSEG and other landowners.  The final size and capacity of the project will be determined, in part, by the total amount of acreage the company is able to obtain.

"The plant proper itself has 400 acres for the whole plant site, but the whole 400 acres will not be able to be built on," he said. "There's a nice big parcel to the North, and that is approximately 400 acres as well. The rest of the acreage will come from the adjoining land owners to the east. We still have to talk to them, so that's not a  foregone conclusion. It's all going to be basically contiguous, because we're going to be using the existing substation equipment that's on the plant location. So it makes sense that everything will be located in the same general area."

Among the questions from the public was concern about capping coal ash land fills created over the years by the power plant.  Farrell said his company would not be doing that kind of work, but Goodenough confirmed that the ash piles are in the process of being capped now.  Farrell said that solar panels will be installed on top of the piles, explaining it is a good use of that land because it would not disturb the land fills, and thus it would not be a threat to Cayuga Lake.

sPower has requested a letter of support for the project from the Lansing Town Board that can be included in its application to NYSERDA.  The bid submission is due late in October.  The company is requesting an 'Index REC' (Renewable Energy Credits) contract for close to 100% of the renewable 'offtake' of the project.  At the moment the largest solar project in the Town of Lansing is a 5 MW 24 acre community solar project.  The Town passed a solar and wind law last July.  Leading up to that there was some discussion of protecting farm land when large-scale solar projects are proposed.  Lansing Supervisor Ed LaVigne said the Town Board will consider the letter at its meeting next week, and possibly also at its October meeting, which is also scheduled before the application deadline.