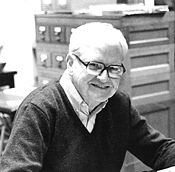 Born December 16, 1924, in Trenton, NJ, he was the son of the late Henry B. and Pauline (Gamble) Cowan, Sr. A graduate of Haverford Township High School, Haverford, PA, Henry proudly served with the U.S. Army from 1943-1945, after which he earned his Bachelor of Arts and Master of Arts in English from the University of Pennsylvania. He taught English and was Academic Dean at Blairstown Academy, Blairstown, NJ, from 1949-1987, and was an adjunct instructor at Tompkins Cortland Community College from 1987-1992.

Henry was a member of the First Presbyterian Church of Ithaca and the Kiwanis Club of Ithaca. He was also active with the History Center of Tompkins County, Tompkins Learning Partners, Loaves & Fishes, Tompkins County Public Library and the RSVP Council. Henry enjoyed spending his free time hand sketching, painting, gardening and cooking. Henry very much enjoyed the company of his family and large group of friends.

A memorial service will be held at 11am, Tuesday, September, 17, 2013, at Kendal of Ithaca, with a celebration of his life immediately after.