Trumansburg once again hosted the Junior Stars Track & Field Invitational on Monday, May 21. This meet is open to varsity athletes who are in 7th-10th grade and who may not yet have qualified to compete at the Sectional or State Qualifier Championships.

Lansing took a strong contingent of their young athletes and impressive performances were rewarded on the podium.

Jack Thomas '20, who ran to a big personal best at this same meet last year, ran to a new personal record as he won the 1600m run, destroying his previous time by over 5 seconds and earning membership to the coveted 'Under 5 Minutes' club with his time of 4:54.15. 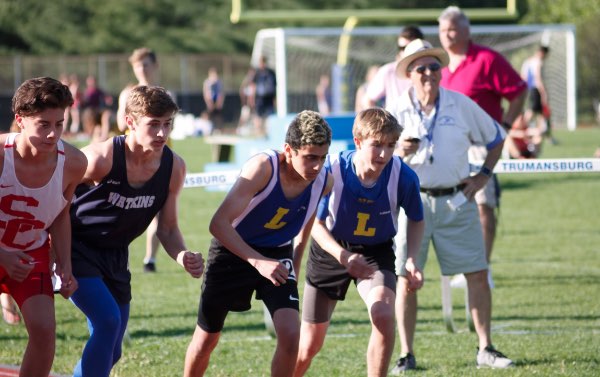 Max Austin '21 has been consistently improving his times in the 800m run and took control of this race from the gun, winning in a new personal best time of 2:12.28 with his teammate, Torsten Gartenberg '20, coming in second with a time of 2:14.06. (Gartenberg also jumped to a new PR in the triple jump.) Also running to personals bests were Miles Kimball '21 in the 100 hurdles, Teddy Brenner '21 in the 400m dash, and Logan McDonald '21 in the 200m dash (McDonald also captured a new best in the high jump).

Sirus Desnoes '21 took 2nd place in the long jump with a new PR of 17'10.75" – which he then bettered at the Section IV Class C Championships with a leap of 18'2.5". Teammates Kyle Reid '21 and Drew Zemanick '21 also took on the long jump, with Reid finishing in 6th and Zemanick earning a new PR. Thrower Colton Stauffeneker '21 threw a new PR of 31'10" in the shot put, good for a bronze medal, and Johnny Hern '21 wrapped up his season with a new personal best in the discus.

On the girls side, Hana Thibault '21 won the 400 hurdles with a time that not only was a personal best but also earned entrance into the Section IV Class C championships in that event. In the 100 and 200, both Valencia Gell '21 and Paige Howard '21 ran to new personal records. Mackenzie Stark '21 was sidelined for much of the season, but came back to win her heat of the 400m dash in a new personal best, blowing away her previous time by 4 seconds. Mid-distance runner Kinsley Jacobs '23 took on some shorter races, running her fasted open 400 to date and joining up with Howard, Gell, and Thibault for a 4x100 that made its way to the podium.