Home is Where the Office Is

Everyone knows of the businesses that are on the streets or in the malls in Lansing, but there are quite a few hidden businesses in town as well. Some corporations outside of town allow Lansing residents to telecommute, working from home by telephone and modem. This takes a special kind of self-motivated person who can work in solitude, regulate his or her life and get the job done.

Jim Sullivan is just such a person. He writes and supports communications protocol software for Unisys, a large company specializing in computer consulting, systems integration, outsourcing, infrastructure and server technology. Jim had been working from home in Buffalo, then moved here about three and a half years ago when his daughter Janine fixed him up with the Lansing woman who would become his wife. They claim that she married him for his chocolate chip cookies, and he married her for her tool collection.

Jim began the transition to working at home while he was still in Buffalo. "What pushed that along," he said, "is that they decided they were going to move the office. They were moving the office to a location that was near the Buffalo airport. I wasn't too happy with that. The physical distance (for the commute) was roughly about the same, but the traffic patterns were just hideous."

So he began taking his laptop and working from home for days, and then for weeks. "My supervisor didn't mind because he was 800 miles away anyhow." By the time he moved to Lansing he was working full time at home, so the extra distance didn't make a difference as long as he had high speed Internet and a phone. The only difference to co-workers was that they had to dial a few extra digits to get an outside line to reach him. 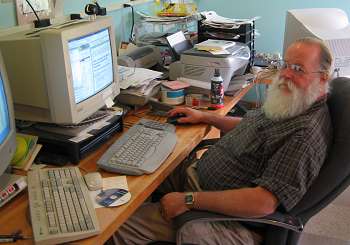 There isn't much that he can't do from home. But living with a spouse and working in the house means that both partners have to figure out what the rules are about when he is at home and when he is at work. Software developers go through some periods of enormous concentration when an interruption can set them back hours of work. "Mentally I am someplace else," says Jim. "Mary will try to talk to me and I can't even speak. I think she has identified that if she says something to me and there's no response, she knows I'm gone."

Other times he is happy and able to chat. So Mary has learned to read the signs. "There are certain computer screens that are up," she says that help her identify when serious concentration work is taking place. The real problem was training the cat not to jump on his lap while he was busy coding or on a conference call.

There are some issues that do need to be worked out. "I'd come home from work and want to be home," explained Mary, "but he'd need to get out. To be able to leave what he was doing and shift he'd have to physically leave the building. And you have to develop those kinds of strategies when you work at home. Having a set office is a good thing, that's separate from your bedroom or your living room."

Jim agrees. He says there should be a separate area in the house that "is the area where work occurs." He recommends setting up work routines. Working in pajamas is generally a bad idea, because it mentally blurs the line between work and home. He also says it is important to develop the sense of when you are at work and when you are not. Another thing that is important is to have a good office chair, because you will spend a lot of time on it.

Working at home offers a lot of benefits including flexibility in your schedule, being more in control of your working environment, being able to look out the window and having an extremely short commute. Jim says it saves the company a lot of money, because after the setup costs it only costs them, perhaps $100 or so per month for telephone and Internet access. In an office it might be 20 times that in overhead, space and maintenance. So the initial cost of putting in high speed Internet, phones and other office expenses more than pay for themselves for the company and employee alike.

"You also take fewer sick days," noted Mary, "because if you have a cold or sore throat where you wouldn't go into an office, you can still work at home."

Companies do not furnish home offices. It is not unusual for them to provide computers and some other equipment, but generally the employee is responsible for his or her office. "Some of the equipment is Unisys's," says Jim, " but about half the stuff in here is actually mine." He says it is important to avoid conflicts of interest where you may find yourself using the company's equipment for personal business or private work.

If you are the kind of person who needs a lot of interaction with other people, Jim says "don't do it, because you won't be able to survive. It's very important that you maintain some sort of a social life." Mary is gregarious, with a large community of friends, which helps get Jim out of the house and means frequent visitors. Jim said, "That basically protects me from social isolation." 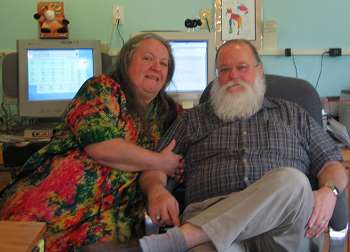 "If you're going to work at home it's probably a good idea to have a good relationship with your partner, concluded Jim. And the couple seem to have worked out most of the kinks. The cat even knows not to come into the office. And when the line between work and home is breached, there are always those delicious cookies!