A busload of Tompkins County and municipal officials toured FLTG (Finger Lakes Technologies Group) Park in Romulus Wednesday to tour Cold War bunkers in which their records are electronically stored.  In an initiative largely driven by Deputy County Clerk Maureen Reynolds state grants totaling $600,000 funded a project to scan 200 years worth of paper records, reportedly saving the county $5.5 million, a large part of which would have been a new records building.

"Maureen Reynolds and Aurora Valenti had a vision for probably the most dismal area of government, which is records and management," said County Administrator Joe Mareane.  "They had a vision about records management that wasn't about a warehouse of boxes full of paper.  They had a vision of the 21st century where records are stored with electrons.  They had a vision that was different than a three and a half million dollar records center.  That's what we were going to.  They said that doesn't work and we want to try something different.  And they did."

Mareane characterized FLTG and the County Clerk's Office as a merging of two visionary organizations in a success story that not only saves taxpayer dollars, but takes the focus off of finding records and puts it on using them.  He also credited Reynolds, who is running for Tompkins County Clerk in November's election, and Valenti for hiring Challenge Industries, a local not-for-profit company that employs people with disabilities, to scan and convert the records into machine-readable, searchable text.  Reynolds notes that New York State is the 49th to implement e-recording, but Tompkins County is one of the first to do it.

Reynolds says the idea came about three years ago when County IT Director Gregg Potter took her to see a Laserfiche software demonstration that he thought would help her office track paper records in a database.  Tompkins County had 200 years of records tucked away in file cabinets and storage boxes. Overall, it had more than 9,000 boxes from 29 departments dating back to 1817, including the County Legislature, County Administration, District Attorney, Highway and Facilities, GIS, tax rolls from the Assessment Office, payroll records, birth & death certificates and environmental health maps, bids, capital projects and maps, civil service history, payroll cards, court and criminal files, and records from the Records, Mental Health and Sheriff's Departments, the Airport and the Office for the Aging.  They decided to purchase the software with the idea of putting bar codes on the boxes and tracking it in the software.

The FLTG connection made it possible to go to the next step: scanning and running the scanned images through OCR (Optical Character Recognition) software to convert text on paper documents to digital form.  Reynalds says that 13 million images were scanned for Tompkins County.  The biggest benefit is that the digital versions are searchable, which Reynolds says was not possible before they were scanned.

When the bunkers were used by the military their outer doors were coated with concrete and additional concrete barriers were placed in front of it.  They were capable of withstanding an RPG (Rocket Propelled Grenade) hit.  A thick inner door could be pneumatically closed.  A remote consol could fill the bunker with fog, and razor wire inside the bunker was a last defense.  That level of security is perfect for a modern day data center that must remain online 24/7, 365 days per year.  The concrete bunker walls are 18 inches thick, and the floor is 13 feet deep.  Dirt and grass covers the top, helping to maintain the constant temperature.

The electronic data storage bunker has eight to twelve hours of battery backup capability with a dedicated generator to charge the batteries in case of utility power loss.  An electrical engineering company stocks spare generator parts so it can be repaired within the eight to twelve hour window.  While water hasn't gotten into the bunker, FLTG installed extra drainage as a proactive step.  The floor of the server room was raised as another defense against possible water.

As you enter the bunker you see battery backups and air conditioning units.  An inverter converts DC power from the batteries to AC.  A locked door leads into a vast server room, which is surprisingly empty.  Server racks take up a small portion of the bunker space, leaving a lot of room for expansion.  As of now about 20 customers including Tompkins County store data on the servers.  Power racks are mounted on top of custom-framed server racks so there was no need to penetrate the ceiling, which would have weakened the security of the bunker.

Before opening FLTG Park the company had already run fiber between its two offices in Trumansburg and Victor, New York, so it was relatively simple to bring lightning fast Internet access on their 'dark fiber' network to the bunker facility in Romulus.  If the connection is lost from one of the facilities, it can be rerouted through the one from the other location.  The Trumansburg fiber is also laid along the east side of Lake Cayuga up to Syracuse.

The paper records storage bunker solves another problem for the County Clerk's office.  Records dating from 1817 and spanning 29 county departments were spread out in boxes and file cabinets, with the bulk in the old Tompkins County Library building.  With that building about to be repurposed, the County needed someplace to store its old records.  Reynolds, along with a few other staff people and their spouses lugged boxes to the bunker, where they are now stored on metal shelves in climate controlled space.

Now that legacy records are stored safely Reynolds says as many new records as possible will be created digitally.  Residents applying for permits will do so on computers, instantly storing them on the servers where the search function makes them much harder to misplace, and drastically reducing the busy-workload for Clerk Office staff.

"We're working on creating electronic forms so they can submit applications online," Reynolds says.  "Then they do it for us and we don't have to do it.  We just went through five days of training on that."

FLTG envisions many uses for the secure facility, including office space in which everything from desks to bathrooms and kitchenettes could be installed, all with fast Internet access and the security the facility offers.  Bunkers could be split into secure 'cages' that would house multiple offices.  Of the 64 bunkers 58 are not used yet, leaving plenty of room for expansion and further innovation.

The grant money has also been extended to municipalities within Tompkins County.  Lansing Town Clerk Debbie Crandall says town records from her office have already been scanned and stored on FLTG's servers. Her office can access the records with the new search capability electronically.  The originals remain in storage at the Town Hall, with some in the attic of the historical records building behind the Lansing Community Center.

"Our (Clerk's Office) records were scanned from the 1800s to current records," she says.  "We also had scanned building permits and the minutes of the Codes office.  The next grant will go toward scanning court records."

Village of Lansing Clerk/Treasurer Jodi Dake says the Village will have its records scanned and stored in the next round of grant funding.  Since the new Village Hall opened this year the old village office has been relegated to storage, so the old paper records will remain there after they are scanned.  In January the Village switched their Internet and phone service to FLTG when they moved into the new building. 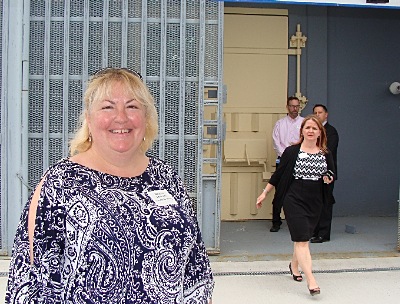 Reynolds says some unexpected benefits include cost savings because of the electronic search capability, and the ability for county employees to view maps and records electronically on project sites.  Judges and ADAs can view criminal files going back 200 years during trials.  The Sheriff's Department was able to reclaim space, including a garage that was once stacked with records that can now be used to park cars.

She adds that the next step will to open a search portal that will enable the public to search public records on the system.  She says that including county municipalities in Tompkins Shared Services Electronic Records Repository (TSSERR) saves taxpayer dollars on all levels of government, and insures that records systems across the county are compatible and accessible.

"All the Tompkins County clerks get together, share ideas, we utilize the same records software and try to eliminate redundancies in our government," says Reynolds.  "It's been fun.  It does change what we do.  We are fortunate in where we are, that they let us do things like this."